Steven Adams is a New Zealand professional basketball player for the Oklahoma City Thunder of the National Basketball Association (NBA).

After playing one season with his hometown team, the Wellington Saints in 2011, where he went unpaid by the Saints in order to keep his college eligibility – Adams moved to the United States in 2012 to play college basketball for Pittsburgh. With the Saints, he helped them to a season win and was named NBL Rookie of the Year.

In his lone season at Pittsburgh, Adams was named the Big East Preseason Rookie of the Year and earned Big East All-Rookie Team honours. He started all 32 games during the 2012–13 season and averaged 7.2 points, 6.3 rebounds and 2.0 blocks per game.

On 2 April 2013, Adams declared for the NBA draft, forgoing his final three years of college eligibility. In June 2013, he was selected by the Thunder with the 12th overall pick in the 2013 NBA draft.

In his NBA debut on 30 October 2013, Adams recorded two points, three rebounds, one assist and three fouls in 18½ minutes off the bench against the Utah Jazz. On 8 November, in just his fifth NBA game, Adams recorded 17 points and 10 rebounds in a 119–110 win over the Detroit Pistons.

From his debut 2013 season through to the current 2020 NBS season, Steven Adams has continued to push his limits and consistently score career, team & NBA league highs. He’s joint Kevin Durant and Serge Ibaka as the only Thunder players with at least 3,000 career points and 350 career blocks.

Only a few players in the NBA can match Steven Adams’ physicality and strength and he remains one of the nicest guys in the league as commented from those who play with him and those against him. 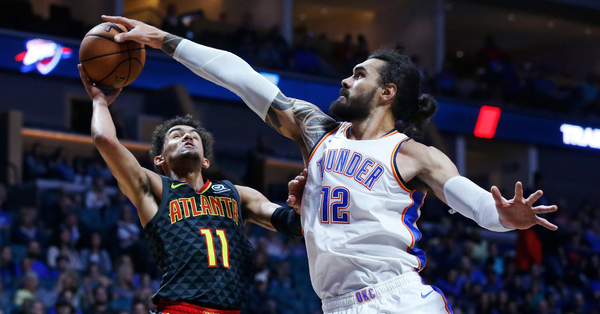 NBL Rookie of the Year

NBL Champion with the Wellington Saints
\

Signed a four-year $100 million contract extension with the Thunder
\

Want to work with Steve Adams?
Get In Touch
Back to Talent