The surfie kid from Tauranga who became a Canterbury icon, Scott Robertson has fast become one of New Zealand rugby’s most influential coaches.

The former All Black is renowned for the passion, energy and drive he brings to team environments, as well as his open and collaborative coaching style.

Robertson’s record is pretty handy too. Since taking over as coach Crusaders in 2017 following successful stints at the helm of the Canterbury and New Zealand U20 sides, he has led the Crusaders to three consecutive Super Rugby titles, carrying on the franchise’s proud history.

His impressive run of success has given the colourful coach plenty of opportunities to display his other talent – breakdancing.

As a player, the rugged loose forward, who made 86 appearances for the Crusaders over eight seasons and played 23 tests for the All Blacks, was known for his aggressive tackling style, earning him the moniker ‘Razor’ he still goes by today. 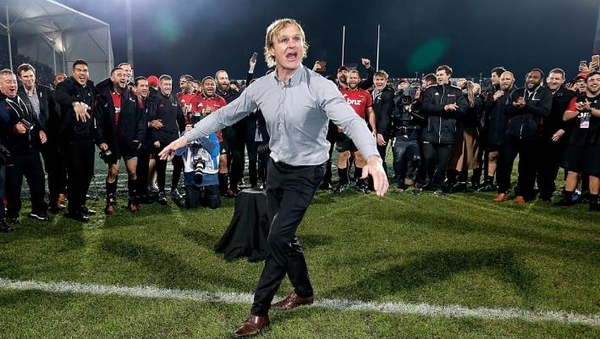 International Debut vs Australia
Want to work with Scott Robertson?
Get In Touch
Back to Talent